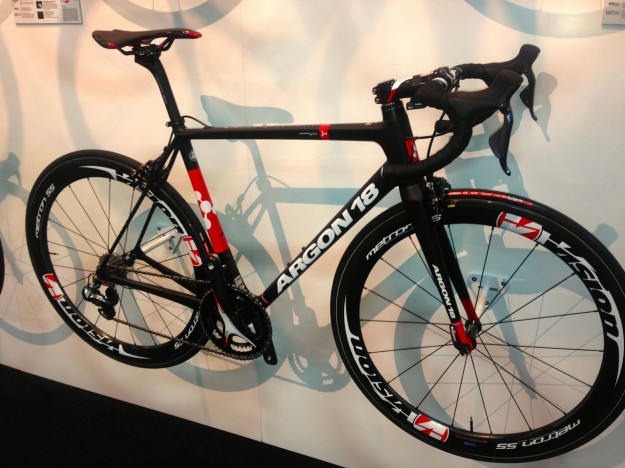 While some might call the black, red and white color scheme throughout the Argon 18 lineup boring or unimaginative , it certainly stood out to me as a unified brand message for the 25-yr-old Canadian brand. Each model looked great hung against the stark white backdrop and begged further inspection.

Stepping into the booth, I was met by Mark de Fabry, who heads up Argon 18’s Customer Service. He was very proud of the brand and eager to share some of the details of each bike. The Gallium Pro immediately stood out to me as the bike of choice for Team Jelly Belly (I saw it extensively in the 2014 Tour of Utah) and the future workhorse of the UCI Continental Pro Team, Bora – Argon 18 starting in 2015.

Argon 18 remains a small, focused bike company with only 35 employees. With meticulous R&D, the entire team is all-in — delivering a quality product for some of the most demanding cyclists in the world.

The Gallium Pro was redesigned for 2014, so the changes are primarily cosmetic for 2015, but with some refinements under the hood as well. This bike is built for performance first and every detail spells that out very clearly. It has asymmetrical chainstays and seat tube/BB junction — all for the sake of eking out every last watt.

You’ll also notice that the seatstays are really, really thin (much like the Cervelo RCA). Again… giving the nod for comfort while the large downtube and chainstays keep the power rolling.

Key features of the 2015 Gallium Pro:

The fan-favorite, Jelly Belly Cycling Team, rides a custom-painted version of the 2014 Gallium Pro — shown below. 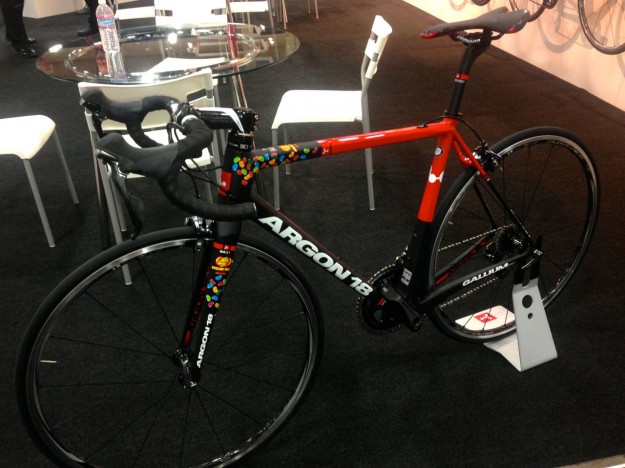