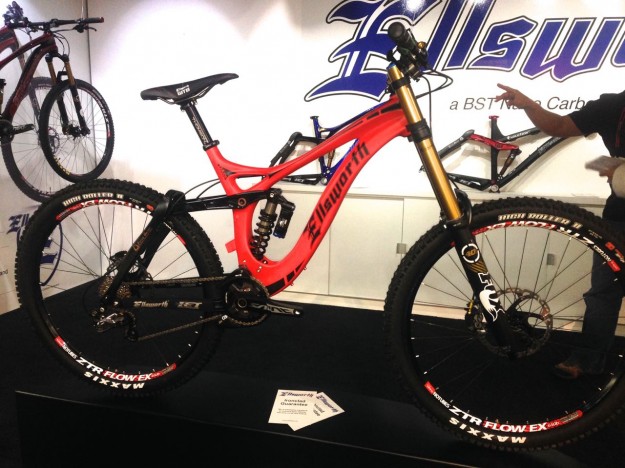 2014 brought big changes to boutique bike brand, Ellsworth. The biggest of those changes was the acquisition of the company by BST Nano Carbon. With the goal of injecting new resources into the company and extensive carbon expertise, the new Ellsworth is charging ahead with huge aspirations heading into 2015.

The re-introduction of the Dare is a statement piece for Ellsworth as it was one of their mainstays for many years. For 2015, the new Dare can be configured as a burly enduro slayer or a full-bore DH sled — depending on the shock of choice.

Ellsworth doesn’t hold back any punches when making claims about their ICT Suspension design. Extensive ride time aboard the platform on a variety of their bikes throughout the years has yielded impressive results and performance — in spite of what appears to be a somewhat dated design. It just plain works and Ellsworth is holding to their ICT guns with the 2015 Dare Carbon.

The Dare Carbon goes with 27.5″ wheels and boasts 225mm (9″) of travel when configured in DH mode, but can be had in either 180mm or 160mm travel variations as well. Unfortunately, you’ll have to change the shock to switch between those modes and swap out to either a 180 or 160mm fork as well, but the bike is capable in all three configurations.

With only the prototype shown at Interbike, the production model may change slightly. One of those changes could very well be the removable front derailleur mount. With modern 1×11 drivetrains, there really is no need for it — I say it gets the axe before full production kicks into gear early next year. Presumably, the Dare will also get the newly-announced lifetime frame warranty — great news for those still questioning carbon’s durability.

The Ellsworth Dare Carbon will hit the market as somewhat of a genre-bending design. With the ability to be either a DH, FR or enduro bike, the ICT suspension will show its versatility as Ellsworth gets back into the gravity scene.