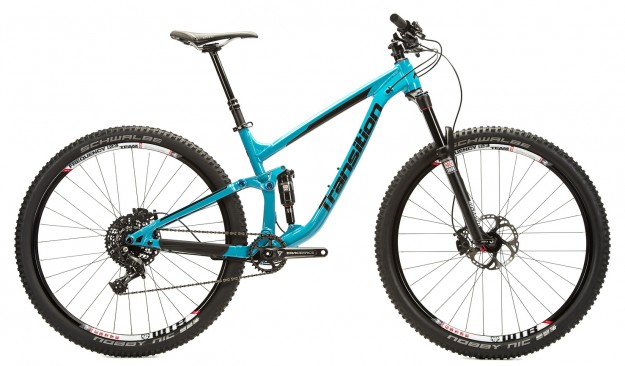 Transition continues to enjoy a solid following in the core freeride, downhill and trail riding market. Based out of Ferndale, WA (just south of the Canadian border), the company loves to make bikes that excel in the type of terrain that’s common in the Pacific Northwest.

For 2015, Transition made major changes throughout their lineup — adopting the now-available Horst Link and dubbing it the Giddy Up Link (a bit of a play on words) and abandoning their brief foray into carbon fiber (for now, at least).

Suspect Number One for 2015 is the Smuggler. As a replacement for the Bandit 29, the new Smuggler is a 29er that aims to capture the sweet spot of the market with modern trail 29er geometry and a smart 115mm rear travel via a wallet-friendly aluminum frame.

The Smuggler does look snappy and is outfitted with a 130mm RockShox PIKE RCT3 in the top-end Smuggler 1 build. The rest of the Smuggler 1 build is pure trailbike with a stealth dropper and mixed SRAM X1/X01 1×11 drivetrain.

Transition is onto something with the Smuggler. It features “just right” geometry and travel to make the bulk of the market happy. If you can get past the near-30 lb weight, the Smuggler 1 is ready to rock your local singletrack.