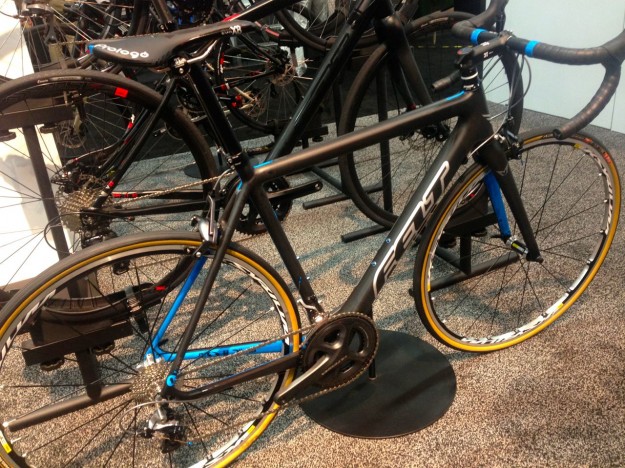 The Felt booth was hopping with excitement and a burgeoning lineup with fatbikes, eBikes, discs galore and niche bikes like the F1 PR. What is the F1 PR? Well, it’s the classics frame that has been ridden by the pros in the spring classics, but has yet to be available to the public. Per UCI rules, they have to offer the racing frames to the public, so here it is.

The F1 PR has the heart of an F1 with a longer wheelbase and lower bottom bracket for added stability and also boasts clearance for up to 32mm tires — huge clearance for a race-worthy bike. Having ridden the F1 before, the extra wheelbase will make this bike descend more comfortably, but the stiffness will still propel you upward with speed.

Don’t think for a second that this isn’t a race bike, because it is. With a short head tube and stiffness that’s the F1’s signature, this bike is built to race and race fast with the ability to go full-gas on the road less traveled. And, the mid-compact drivetrain with an 11-28t cassette gives enough of a range to climb the steepest hills.

During the 2014 racing season, Felt has been well-represented by the Hincapie Development squad — particularly in The Tour of Utah and the USA Pro Challenge. But, that team is not racing cobbles, so it makes you wonder if a European team sponsorship is on the horizon. Or, it’s release is just a year removed from the previous Argos-Shimano squad sponsorship.

This bike will be available in limited quantities in a single complete build with a mix of Ultegra and Dura-Ace for $4999 and frame-only for $2499.