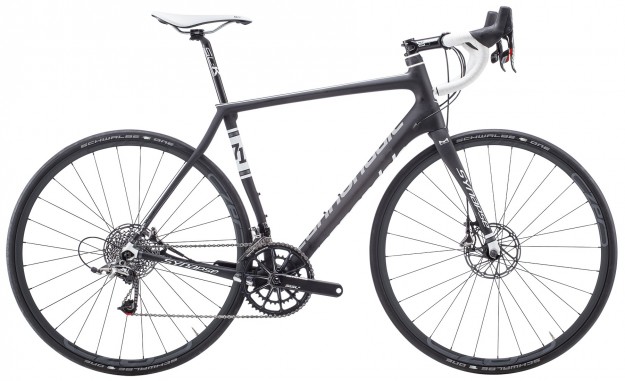 2015 is the year of road disc brakes. After a failure to launch this year, next year really, truly appears to be the year of road discs. Every major manufacturer has several bikes in their line that are equipped with the shiny discs. Shimano had a year to catch up and SRAM had a recovery year. All the while, the public has clamored for the promise of all-weather braking power to finally arrive to skinnies.

For 2015, Cannondale is going disc-heavy on their class-leading Synapse endurance lineup. Accolades have poured in across the industry for the new Synapse. We add our sentiment to theirs with a huge bravo to Cannondale for delivering such a fine bike. The comfort of the Synapse doesn’t preclude it from sprinting and climbing with the best bikes on the market. And, while adding disc brakes will add some weight, the sheer stopping power they will provide will outshine those modest weight gains.

The SAVE Plus rear triangle and fork offer real-world cush while also delivering enough zip to crush the Spring Classics and cobbled stages of this year’s Tour de France. Current Cannondale rider, Ted King, had a ton of input into the Synapse and will likely be missing his cobble-gobbler in 2015, unless he can sign with the new Cannondale/Garmin squad.

Indeed, Cannondale has chosen to continue with quick-release axles at both ends for the Synapse disc. This is a sentiment that is shared amongst most of the major players at this point. While thru-axles are certainly better for stiffness and performance, mountain bike standards aren’t quite right for road bikes, so sticking with QR’s just makes sense. The Synapse joins the Specialized Tarmac and Giant Defy, among others, to stick with the current axle standards.

The upright geometry is really spot-on for most riders. It’s time for the calls from “hard core” roadies to “slam that stem” to cease. If you have a look at the pro peloton, most riders are slammed with aggressive geometries, but there are a fair number of riders with — gasp — spacers and normal stems with a modest 6-7 degrees of negative rise. Those guys need to eke out every extra watt and bike fit always trumps vanity.

The 2015 Synapse Hi-Mod Red Disc looks to be a fantastic, disc-equipped bike for the masses. We’re chomping at the bit to ride one.