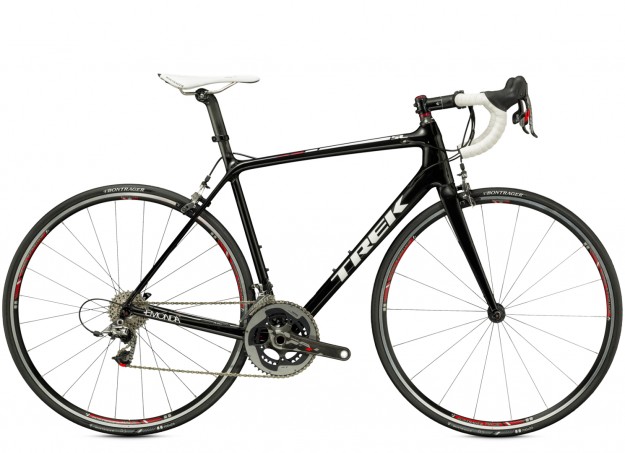 When Trek introduced the Emonda SLR just before this year’s Tour de France, they turned plenty of heads. Some were floored at the 10.25 lb weight of the top-end SLR 10 and others were calling Trek out saying the bike is not real-world strong, etc. You know, the classic “carbon isn’t strong enough” argument that’s been going on for years.

News flash: carbon is strong, light and is structurally-sound for use in bikes.

While yes, the SLR 10 is one fantastic display of Trek’s carbon mastery, it’s $15,749 price tag is well north of what most of us can even dream to afford. So, let’s focus on the 2015 Trek Emonda SL 8 Red build.

For starters, the SL 8 features a different frame layup. The SL 500-series OCLV carbon construction is not as light as the 700-series used in the SLR but costs 1/3 as much. Because of this, the SL yields almost 400 grams in frame weight to the SLR at 1/4 the frame cost. A lightweight frame is beneficial, but there are other factors at play when considering a full build.

The wheels on the SL 8 are the Bontrager Race TLR’s, which come in just over 1700 grams for the set. These workhorse wheels can further reduce rotating mass and improve road feel by going tubeless — an easy transition with any of their wheels. The cockpit is a smattering of Bontrager bits as well.

To get the weight right at 15 lbs, the SL 8 Red, is dressed in a full SRAM Red groupset. This is the lightest kit available and maintains a pro level of performance on this race-worthy build. Trek opted to go with a climbing-friendly gear range featuring compact chainrings paired with an 11-28T cassette.

The Emonda is built to excel as an all-rounder — particularly on terrain that involves lots of climbing. While the frame is built for all-day comfort, it’s primary goal is to provide a stiff and light chassis for efficient ascending and confident descending. As such, the feedback thus far is that the frame does translate a bit more road buzz than the Madone and certainly more than the Domane.

While the SL 8 doesn’t feature the ultralight 700-series OCLV found on the SLR frame, the complete build is smartly-spec’d for an ultralight 15 lb. package. It’s hard to argue with the value that this particular model provides, so if you’re set on an Emonda, this build has a lot to offer — that’s why I’m calling it the sweet spot of the line.