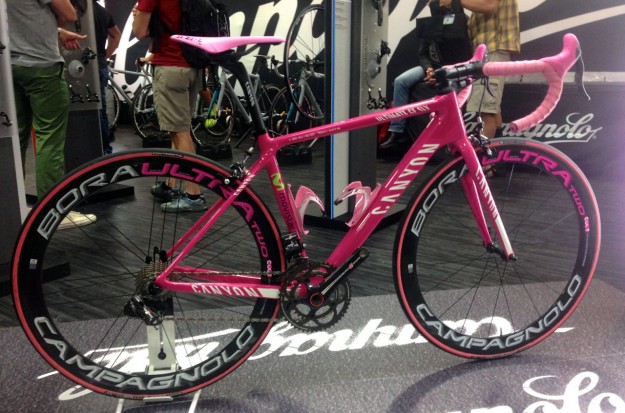 This year, there were a handful of race-winning bikes on display. Ridley had the yellow Helium SL made for Tony Gallopin’s stint in the maillot jour, Bianchi had the Stage 5-winning Infinito CV of Lars Boom and Campagnolo had the maglia rosa version of the Canyon Ultimate CF SLX, ridden by 2014 Giro d’Italia winner, Nairo Quintana.

I love seeing Canyon bikes here in the United States — even if they are essentially museum pieces. Someday, they will do business here, but until then, this is as good as it gets.

After crashing out of the 2014 Vuelta a Espana, Nairo Quintana is on the mend. While he’s stoked to have taken the 2014 Giro, I’m sure Canyon and Movistar are looking forward to a yellow-painted Ultimate CF SLX in 2015.