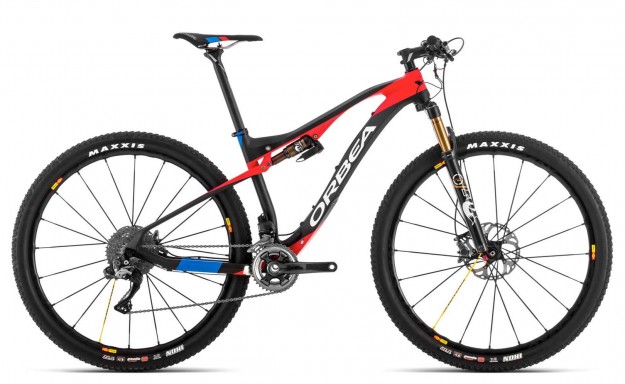 Shimano’s Di2 drivetrain has won over many fans on the pavement, so it makes sense that they would transfer the technology to mountain bike grossest. So, for 2015, we’re seeing a handful of elite bikes decked out with Shimano’s latest XTR Di2 drivetrain.

The top-of-the-line Oiz M-LTD not only features an all-new frameset, but boasts a full Shimano XTR Di2 2×10 drivetrain. This electronic group integrates seamlessly into the confines of the Oiz frameset.

Something Orbea did this year is offer the Oiz in both 29 and 27.5 wheels. It’s just too difficult to get a size small (15.5″) frameset to work well with 29-inch wheels. And, riders of that stature may be best served with the tweener wheels anyway. As such, Orbea only offers 27.5 wheels in their smallest frame, but makes them optional for larger sizes — to accommodate personal preferences.

For me, the 29-inch version is just the ticket with 100mm travel front-and-rear and a fully-loaded XC racer that boasts all the latest gadgets available. One of those gadgets is Fox iCD integration, which changes the shock’s dampening characteristics electronically. Without having to deal with the throw involved with mechanical suspension adjustments, the iCD system has the promise of being used in more instances, thus shaving more time off every lap.

All these gadgets are fine and dandy, but how do they perform? Pretty darn well, actually. The 2014 UCI World Cup XC championship was won by Canada’s Catherine Pendrel aboard the new Oiz, just months after its official launch. Quite the pedigree already.

With a name derived from a rugged peak in Spain’s Basque Country, the Oiz is built to conquer every lung-busting climb and flat-out descent and features the latest technology to propel you to the top.