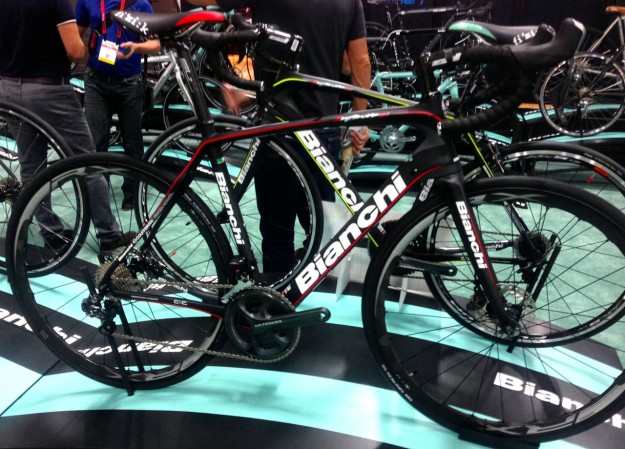 In the Bianchi booth, I got an up-close and personal view of the elusive Infinito DV Disc (though admittedly, the photo is pretty poor). I’ve seen plenty of the rim-brake versions around, but not a single disc version — until now.

The Infinito CV Disc shares almost everything with its caliper-clad brother, but also has some unique features only found on the disc version. Most notably (aside from the disc brake mounts) is the 3mm longer chainstay to go along with the extra-wide seatstay clearance (for larger rotors). See below for a view of the flared chainstays. 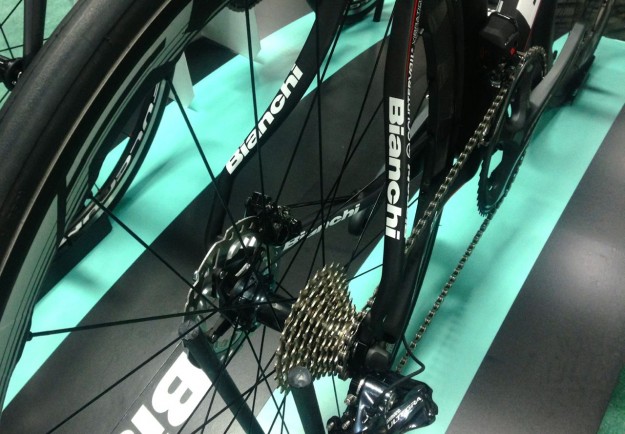 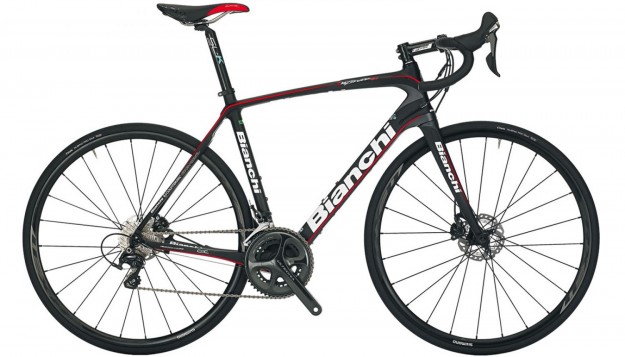 Watching the video that shows the function of Countervail against standard carbon tubes is crazy to watch. On paper, the Infinito CV is something special and Lars Boom will tell you that it had a huge part in his Stage 5 win of The Tour de France. Instead of funky suspension-like frame add-ons, Bianchi has infused the entire frame with a sandwich of Countervail material that absorbs vibration so it doesn’t pass through to the rider’s body.

The geometry of the Infinito CV is really perfect for most riders. With the taller head tube, most riders will get away with a spacer or two (or none) to achieve the proper riding position.

One of the things that I still don’t fully understand is why Bianchi chose to go with a standard front derailleur mount as opposed to the now-standard direct-mount. I’ve yet to get a straight answer on that one.

The Infinito CV Disc is fully-equipped with Shimano Ultegra mechanical, carbon cockpit and a set versatile Vision carbon clincher’s too for a full $7999 price tag.